Hi guys,
I've postponed some other tasks and re-factored Engine Beat effect as you had asked.
New FX is available in fresh published beta version 2.28
Group-box Engine Beat now features a new small button [>] which means "More Options available for this FX".
When you press it a new More Options window will be opened.
Default value of a threshold to trigger FX is 65% of Max RPM reported by a game, since I've tried to implement the new FX according to Mr Latte submission. By default the FX gain will increase from about 5 % when it's triggered proportionally to RPMs and will reach 100 % at max engine RPMs. You can disable that gain change by "Constant Gain" checkbox.
The algorithm is the same for both JetSeat and bass-shakers.

If you set "Start Effect at  % of Max RPMS" value to 0 the FX will work as it worked before. Just in case if anybody will miss it. 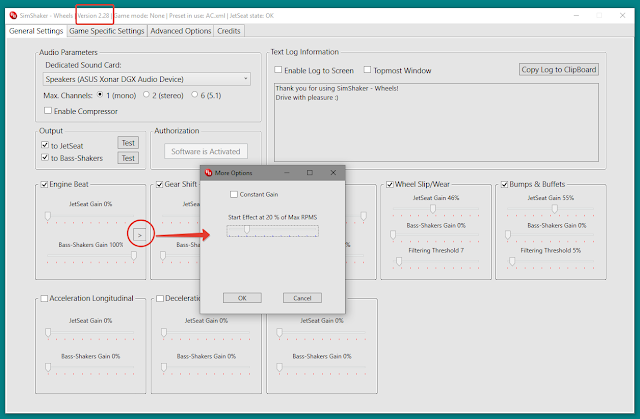 I've tried the new FX out with just Assetto Corsa yet. Let's try it out with other games.

Please keep under control your antiviral software while application updates and starts for the first time, especially if it's Windows Defender. I'd prefer to spent more time on further developing of the application, than explain again and again how to restore it after Windows Defender attacks.

Guys, who asked for 1CGS IL-2 Sturmovik support in SimShaker please vote for that 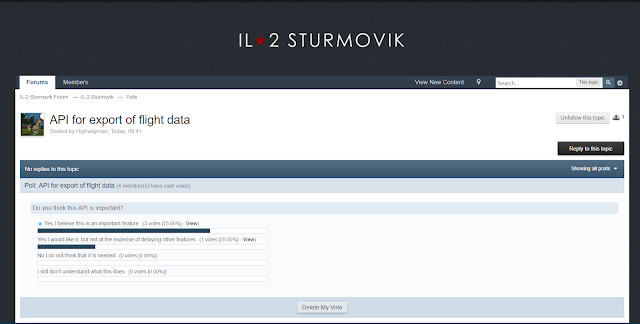 Email ThisBlogThis!Share to TwitterShare to FacebookShare to Pinterest
Ярлыки: Air Combat Simulation, Other

There are some general GUI improvements:

Let's test it out! 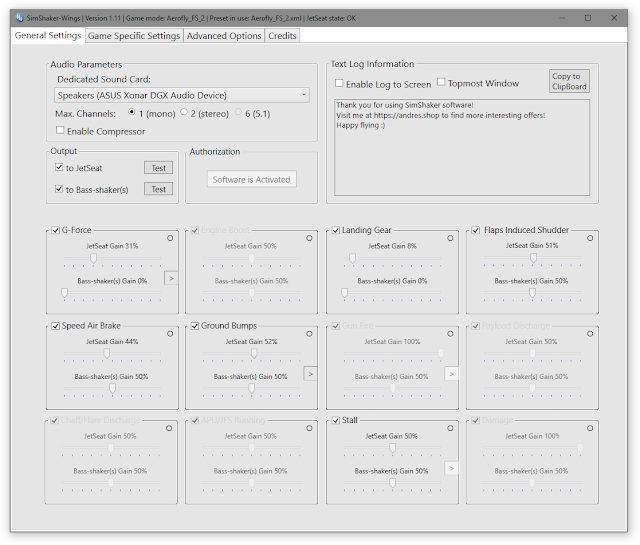 Guys, I'd like to kindly ask you to not mix up free to use SSA by Olaf and pay-ware addon SimShaker Sound Module by Andre. That misunderstanding makes troubles for us, as developers.
Hundreds of Gametrix JetSeat owners use SSA absolutely free. SimShaker Sound Module is just an addon to bring new capabilities, but not the core software.
SSA can be used without Sound Module, but not vise versa.
Автор: Andre на 11:26 AM

You can find a link to download the beta version on the bottom of SimShaker - Wings User Guide page. 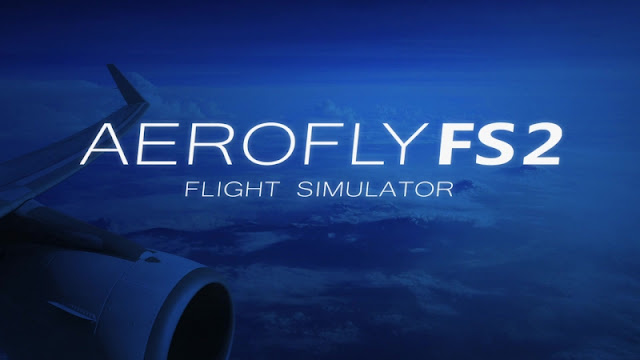